The Hermetic and Alchemical Figures of Claudius De Dominico Celentano Vallis Novi from a Manuscript Written and Illuminated at Naples A.D. 1606 | Chapter 36

by Moe | Secret Teachings of All Ages | 0 comments

In his dedication the author and illustrator of the manuscript declares that he has set forth all the operations of the Great Work. He prays to the Holy Spirit that he may be included in the number of those who have pursued this most noble of the sciences and that he may be set always in the path of righteousness. Exclusive of his own researches, the main sources of his information are said to be the writings of St. Thomas Aquinas, Raymond Lully, and Arnold of Villa Nova.

To protect themselves from the persecution of despotic theology the mediæval alchemists couched their philosophy in Christian terminology, although the great secrets of the Art were derived largely from Egyptian or Arabian adepts. The Mohammedans were masters of the Hermetic secrets and even the great Paracelsus secured from them the major part of his knowledge. In their manifestoes the Rosicrucians also disclose the Arabian source of their secret doctrine. Hence it should be borne in mind that the relating of the alchemical teachings to Biblical symbolism was a gesture of expediency. In their search of the Scriptures for the arcana of Israel, the Qabbalists substantiated in great measure the alchemical interpretations of the Bible, for the soul of alchemy is one with that of Qabbalism. Both schools have a common end, being who concerned with the mystery of human regeneration, despite apparent discrepancies in their symbolism.

The publication of this manuscript places at the student’s disposal the most profound secrets of the Hermetic Art. At first the task of decipherment may seem hopeless and the superficially-minded will be tempted to scoff at the possibility of real knowledge being perpetuated in such unconventional fashion. The scoffer will not realize that one of the purposes of the document is to awaken ridicule and thus preserve more effectually its arcana from the profane. A few sheets (such as those here reproduced) represent the life work of one who has consecrated himself to the task of tearing aside the veil of the World Virgin. Years of research and experimentation, days of incessant labor, nights of prayer and meditation, and at last comes the realization of accomplishment! This is the real story told by the grotesque figures drawn so painstakingly upon the faded, worm-eaten pages. Those who have glimpsed the greater realities of being realize that the fundamental verities of life find at best only imperfect expression through physical symbols. Only those who have passed through the travail of spiritual birth can adequately comprehend and properly reverence the pathetic efforts to portray for others that knowledge necessarily locked within the heart of the one who knows. 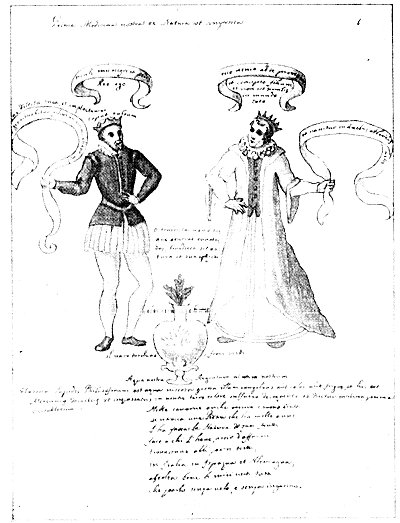 Leaf 1. The top line reads: “Our earliest medicine was made of natural objects.” About the king and queen appears the statement that to them a son shall be born “in two trees of the vine,” resembling his father and without equal in all the world. About the vase is written: “Green and white.” “The vase flame color, the flowers green.” “Our water, our silver.” The lines below read: “The material of the Philosopher’s Stone is that thick, viscous water, which either heat or cold congeals. It is Mercury boiled down and thickened, cooked in neutral earth with sulphurous heat and is called the Prime Material of the metals. In caverns yet dark, and forbidding mountains, if a Stone be found which a thousand years ago Nature made out of her fruits, it will bring him that has it out of trouble. * * * Listen carefully to all my verses; I speak them without veil and without deception. 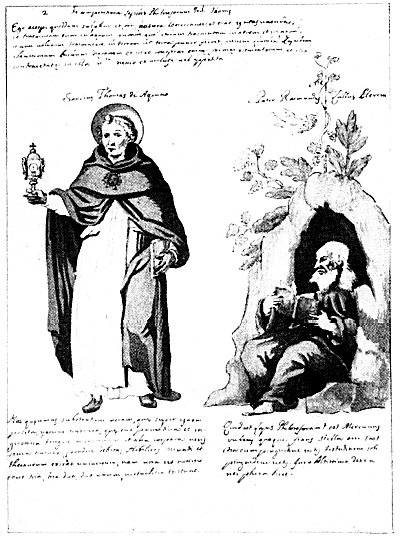 Leaf 2. At the top is a quotation from St. Thomas Aquinas concerning the composition of the Philosopher’s Stone, which is described as of the purest transparency; in it all the forms of the elements and their contrarieties were visible. Beneath the figure of St. Thomas Aquinas is a short paragraph praising the excellence of the Philosophic Stone, declaring that from the one substance can be derived three and from the three, two. To the right of St. Thomas Aquinas is a likeness of Raymond Lully seated in the door of his hermitage. Under his feet appears a quotation from this celebrated alchemist, beginning with the question, “What is the Philosopher’s Stone?” After declaring it to be a reddish, fixed mercury, Lully swears to the Almighty that he has told the truth and that it is not permissible to say more. (The original manuscript is mutilated at this point.)