The Georgia Guidestones: What the 10 guidelines say and the plan for depopulation

The Georgia Guidestones are a set of six tall granite monuments that contain the new ten “new commandments” for humanity and the world. They are also known as “America’s Stonehenge or “America’s Jerusalem.”

The massive stones are located at the top of a hill on the north-western brow of the Elberton Granite Finishing Company, about 5 miles (8.0 km) northeast of Elberton, Georgia, United States. It sits on private property, but they still allow visitors. 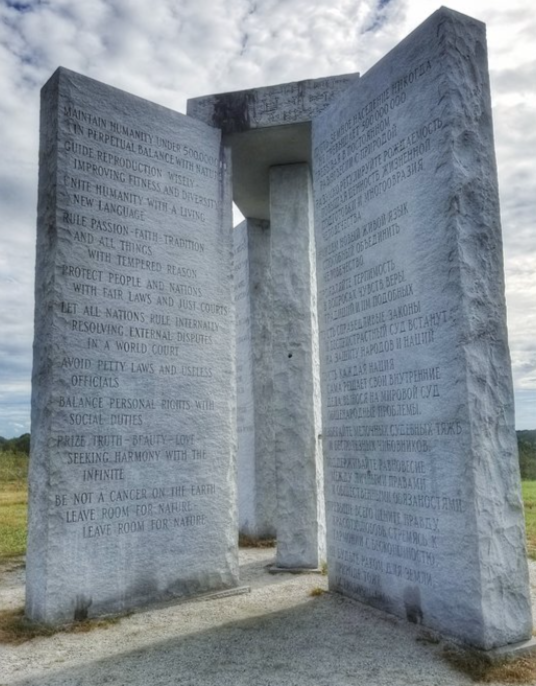 They were erected in March 1980 and inscribed with ten guidelines for an “Age of Reason” or “New Age” that would be ushered in at the end of the current “Age of Pisces”. The monument is about 20 feet tall, and was built to give people instructions on how to rebuild civilization from scratch if it were destroyed in the future.

The commandments inscribed on the structure are in eight modern languages: English, Spanish, Swahili, Hindi, Hebrew, Arabic, Chinese and Russian. 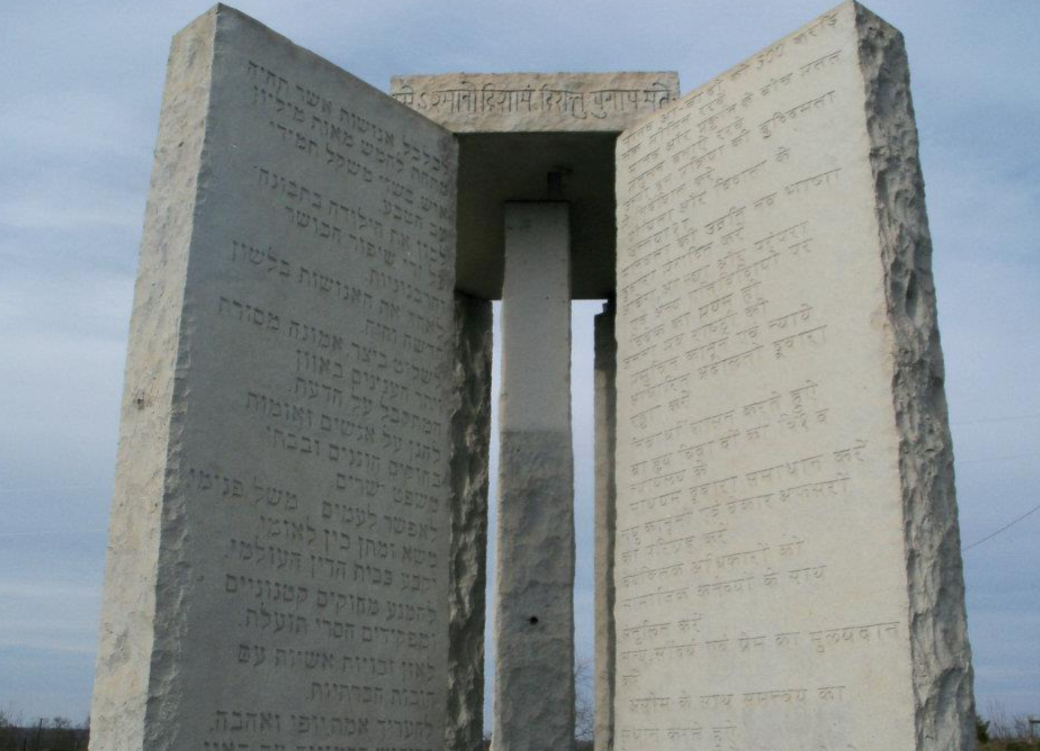 The first of the 10 guidelines reads: “Maintain humanity under 500,000,000 in perpetual balance with nature.”

Some people think that’s too high; others think it’s too low. While others think it is part of a sinister conspiracy written in stone by a secret global elite cabal who are planning openly to exterminate billions of people to bring about a New World Order.

Today, over 40 years since it was built, it still attracts the attention of the media and curious researchers, who are often labeled conspiracy theorists. 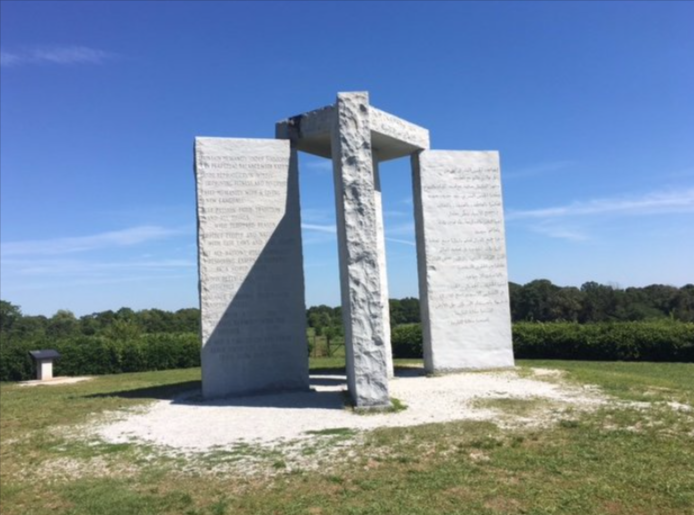 One of the monuments leading underground experts,  Van Smith says that they people behind it are for establishing the beginnings of a totalitarian tribal government.  Alex Jones of InfoWars.com says that the stones call for the mass culling of humans. 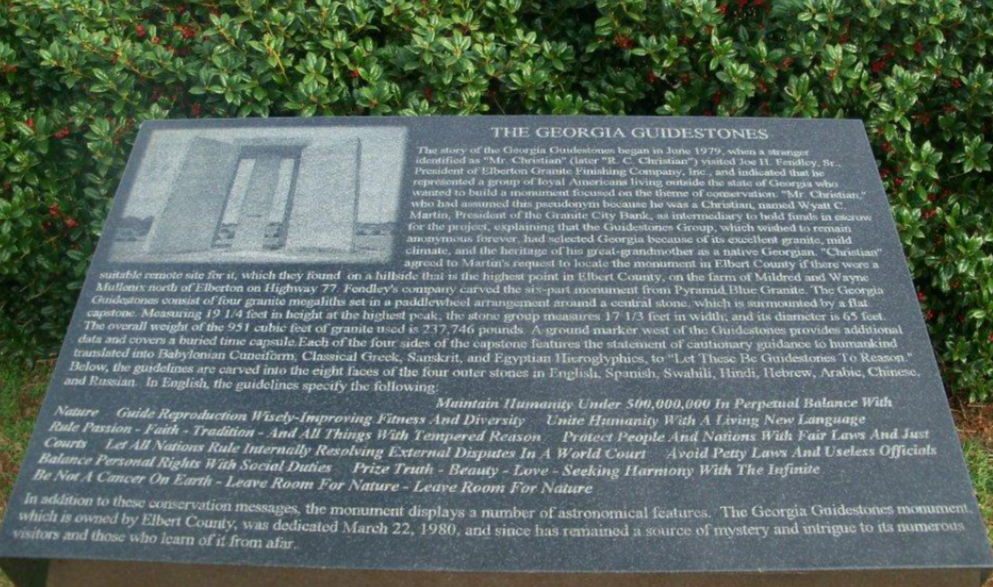 4) Rule passion — faith — tradition — and all things with tempered reason.

5) Protect people and nations with fair laws and just courts.

The Georgia Guidestones were created by a man and group who remains shrouded in mystery and intrigue.

The only name we know for the author is R.C. Christian, which is said to be a pseudonym. The group who commissioned the monument called themselves, “A small group of Americans who seek the Age of Reason” and a banker who made the deal named Wyatt Martin.

R.C. Christian has never been identified publicly, but some people claim that he is associated with various organizations that promote population control and eugenics (the practice of selective breeding to improve the genetic quality of the human population).

Since the monument was built, several articles and books have mentioned or have been written about the Georgia Guidestones.

“The identity of the man who called himself “R.C. Christian” is a secret that Wyatt Martin, the banker who acted as his agent in Elberton, vows to take to his grave.

“He told me, ‘If you were to tell who put the money up for this, it wouldn’t be a mystery any more, and no one would come and read it.’ That had to be part of the attraction, to get people to come and read his 10 rules that he came up with,” Martin said.

“According to the also deceased Joe Fendley, then president of the Elberton Granite Finishing Company, Mr. Christian was a tall, well-dressed stranger who showed up in his office on a Friday afternoon and offered to pay a substantial sum of money for the construction of the monument. Fendley sent him over to Wyatt C. Martin, then president of the Granite City Bank.

Within a few weeks, Christian had wired money to the bank and brought in a wooden model of the monument, and the quarrying and construction had begun. Over 4,000 letters were ultimately etched into the surface of the stones. A year later, on March 22, 1980, the Guidestones were unveiled — on a former cow pasture on U.S. Highway 77.”

The structure is composed of six granite slabs, ranging from 6 to 10 feet (1.8 to 3.0 m) tall and weighing up to 80 tons, each, set on end and leaning slightly inward toward the center.

They were installed with their southern faces inscribed with text arranged in an approximate circle 20 feet (6 m) in diameter.

The four outer stones each have one smooth face and one inscribed face; they are aligned so that the smooth faces form an equilateral cross when viewed from above by plane or satellite photography; this alignment has been noted by many observers over the years since construction was completed in 1980.

The inner two stones have only inscribed faces; they are set at an angle such that when viewed from above by plane or satellite.

In 2008, graffiti was painted on the stones with slogans such as “Death to the new world order”.

Again in September 2014, the stones were vandalized with paint stating, “I Am Isis, goddess of love”.

The motivation and meaning behind the Georgia Guidestones is somewhat difficult to discern as it was left intentionally mysterious by the person or group that commissioned it.

The messages are not cryptic or hidden, but in your face and apocalyptic, to say the least.

Their end goal is to change the way that we live our lives and treat this planet or home, Earth.

The only way that is going to happen, according to the people hiding behind its construction, is with 7.5 billion less of us.