Symbol of the Owl

Before gods, goddesses, demons and nocturnal monsters of the netherworld were depicted as 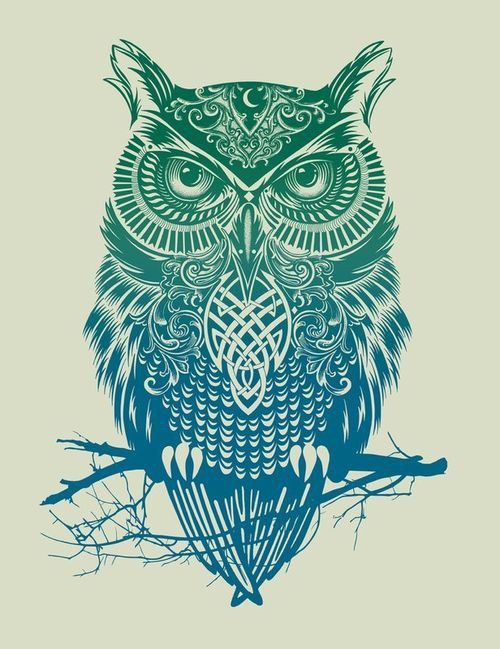 humans, they were almost always shown in some type of animal form. This ancient network of immortal symbolism we can witness today with one of these secret deities that has been depicted throughout the course of human history as the bird of night, known as the owl.

The symbology of the owl has almost always represented evil omens, demons, illness, disease and death to many interrelated ancient cultures such as the Hittites, Sumerians, Egyptians, Ethiopians, Africans, Phoenicians (Hebrews), Greeks, Romans, Europeans, Arabs, Hindus, Indians and Latinos. A nocturnal bird of prey that to them was not a symbol of wisdom, but the creature who disturbs their sleep and is the “angel of death.”

The Egyptian name for the owl is Mulak or Moloch represented by the letter symbolism of M (m) because its name began with M, and the eyes or horns of this secret deity looks just like the letter m.

The people who some call the Sumerians, called the owl the ukuku. An example is from the Sumerian verse: “May the ukuku, the bird of depression, make its nest in your gateways, established for the Land!,” and “The bird of destroyed cities . . . . . . a nest. The sleep-bird, bird of heart’s sorrow.” In ancient Syria, the owl is found recorded in the eighth-century treaty in the Aramaic inscription from Seﬁre, in which the owl serves as an emblem of desolation.

The word for ‘owl’ in Hittite is hupupiau (Puhvel 1991: 3.130-31). The Hittites appear to be the first race of people to depict this deity as an owl like bird that has some of the characteristics of an owl with large eyes, but looks like it is a different creature than the owl which I intuitively suspect it always has been. 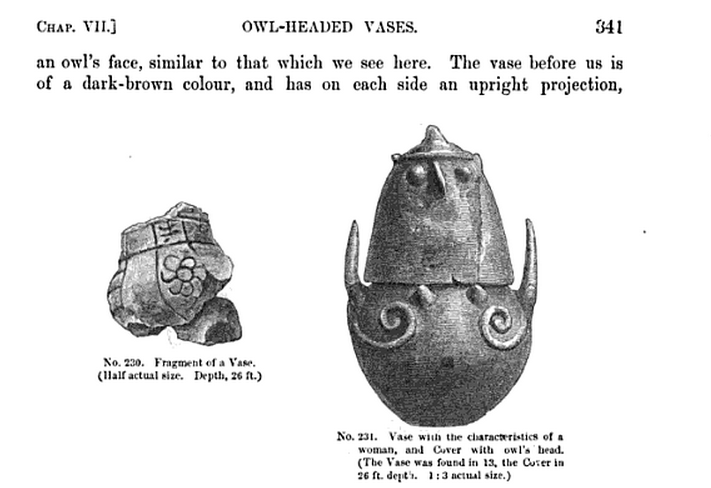 They did not name this deity hupupiau after the owl, but called this strange owl looking creature Athi (Atti, Khati or Hethei). Ata-kal, At-banti, Aitua (Aitu-wa), Atu-ba,Athi-ni, Ata-ma and Atta-ma (” the place cf Ata “) were names of towns near Carchemish mentioned in the geographical list of Thothmes III. Some of the world’s first symbolism of this owl creature of heart’s sorrow and desolation shown above was found at the Hittite capital of Carchemish. 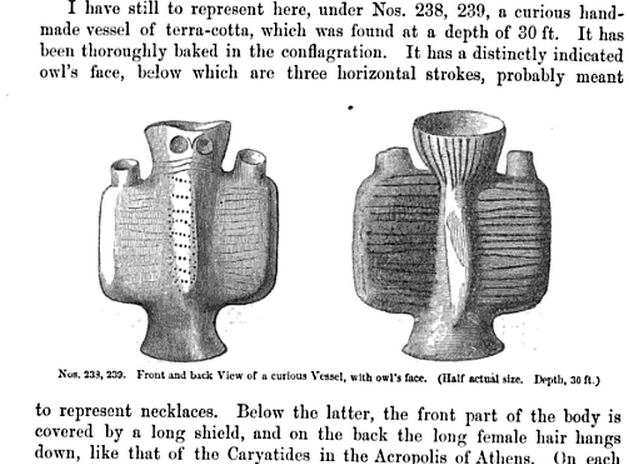 These ancient artist depictions of the deity may seem to be done by amateurs or to be crude representations of the owl, but I find them to be the most accurate of the true deity that they were honoring in this symbolism. As time moved forward like in the era of the Phoenicians and Greeks, they would start taking on human form.

In the Hittite myth of Elkunirsha and Athi or Asertu, Ishtar becomes an owl in the hand of Elkunirsha (El-creator-of-the-earth). Their cousins, the Trojans called the owl deity by the name of Ate, who then later became identified as the Greek Goddess known as Athena. 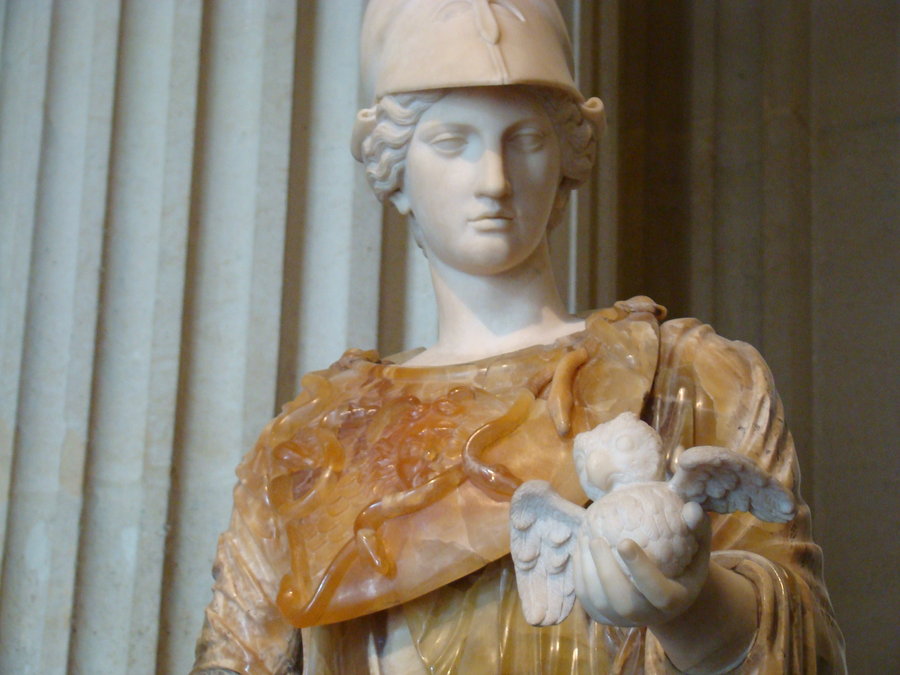 These ancient names such as the Hittite ‘Athi’, Trojan ‘Ate’ and Greek ‘Athena’ would be the words we use today to describe how we human consume food with the English words like eat, and ate. This owl deity who lives within us all was directly connected to this alchemical process that we know of as eating. These truths become evident in the epic tales of the Greeks which I will explain briefly below, and in a future article on the science of this ancient owl look- alike deity.

Here is the beautiful Greek Athena who is the same as the Etruscan Goddess Minerva with her sacred owl symbolis-‘m.’ 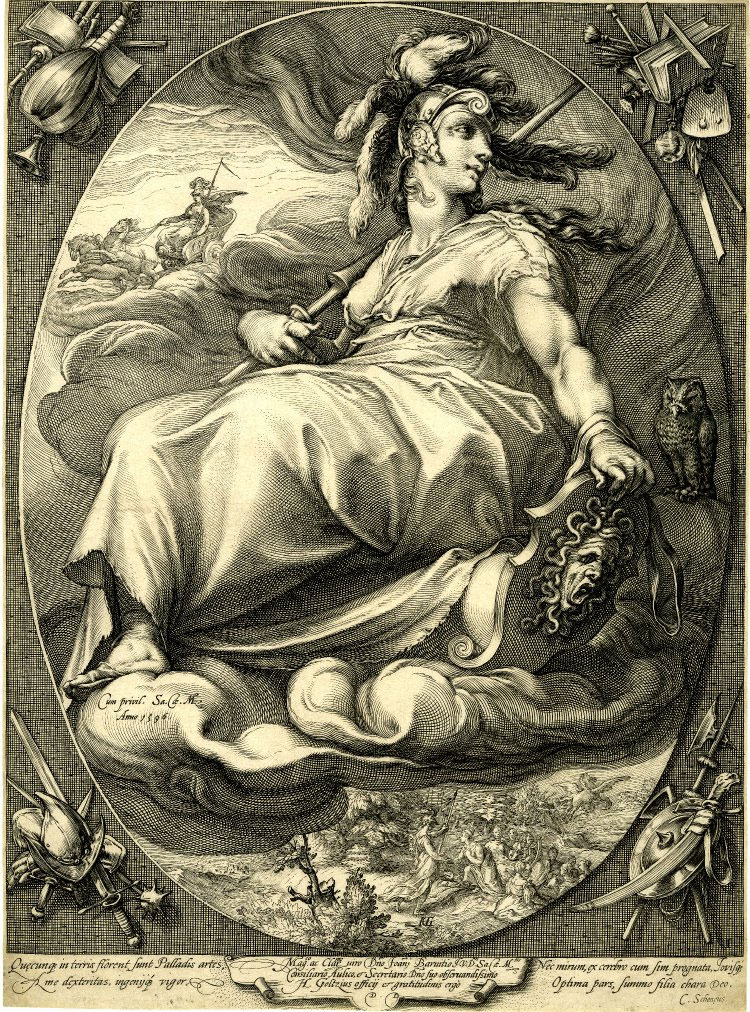 Other versions of this name that can be found for such goddesses as Astarte, Ashtaroth, Ashtoreth, Athtar, Atar, Atargatis, Ishtar and Isis to name a few. 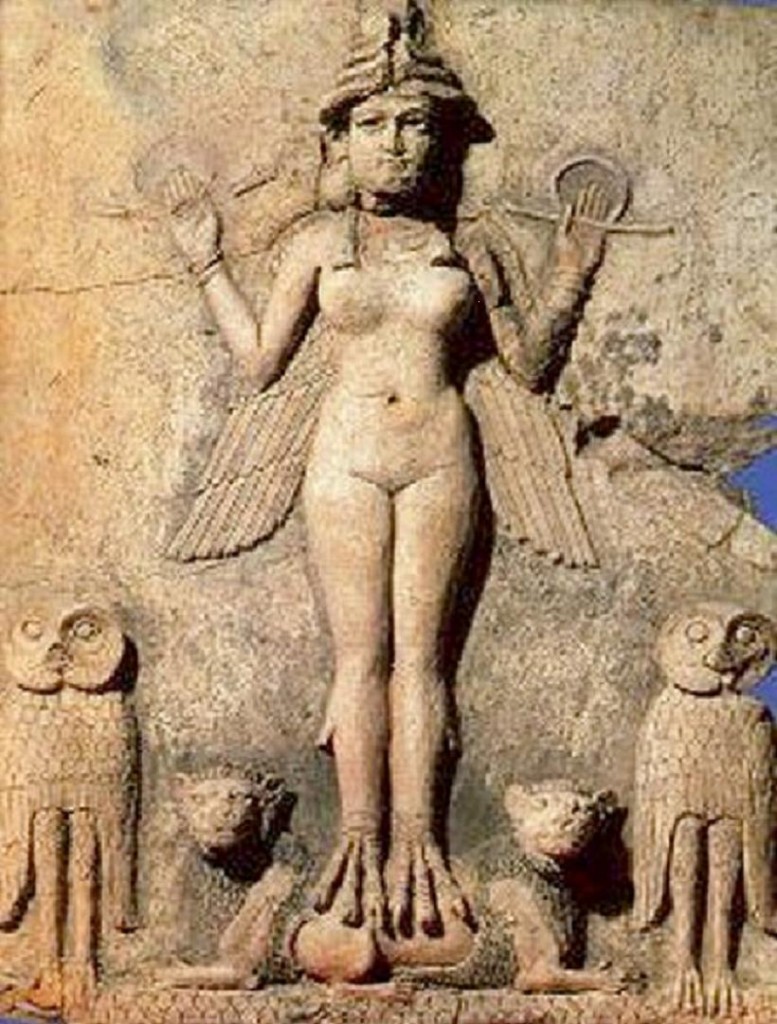 These various representations of this secret deity then gave rise to the English pagan goddess of fertility and spring known as Eostre, and the Germanic Ostara. The legend further evolves from the owl symbology to that of the rabbit or more appropriately, the hare. This symbology was always associated with this deity due to its ability to lay eggs within its host, and I suspect as time went by the evil associations in the old world in regards to the owl had caused this legend to evolve into the Easter holiday we have today with a rabbit who lays speckled and colorful eggs that remain hidden to us. Eggs that we have to search for in order to claim oUr surprise hidden on the inside.

THE PHOENICIANS AND THE OWL

The ancient Phoenician Hebrews who were the descendants of the Hittites and Egyptian Israelites were the race who gave us the Old Testament. They were called the Phoenicians by the Greeks, but they referred to themselves as the Sidonians from Sidon of Crete (Cretans). Their chief deity was Ashtart who the Israelitish prophets called “the abomination of the Sidonians.” Sidon on Crete was at one time the main headquarters of the Phoenician maritime trade and commerce. The goddess Ashtart became the patroness of the Sidonian mariners, who according to Lucian was also identified with the moon.

The Phoenicians/Sidonians Hebrews sometimes sacrificed owls to be included in their burials back to the 7th century BC. In biblical law, owls are included in the list of birds that were forbidden to be eaten. An oracle concerning Edom, Isa 34:11, declares that the eagle owl will inherit the devastated land, and another possible variety of owl will also dwell in it. The eagle owl roosts on the capitals of a desolated Nineveh in the prophetic vision of Zeph 2:14. Later the owl deity known as Ashtart becomes the demon goddess that is known as Lilith, who was created in the first Genesis account.

MORE HISTORY ON THE ANCIENT SYMBOLISM OF THE OWL

The owl symbolism later migrated to Italy and the Romans with the Phoenician tribe of mariners from Crete known by the name of the Italian Umbrians who were said to survive the deluge, and the race who gave rise to the empire of Rome. The Roman poet Pliny terms the bird “bubo funebris et maxime abominatus, (owl mournful and most abhorred).” Virgil describes its death-howl from the top of the temple by night, a circumstance introduced as a precursor of Dido’s death.

Likewise Ovid had said the owl’s presence was an evil omen, and was supposed to destroy children if they were not watched. In the 5th Book of his Metamorphoses, relates how the demon of the underworld Ascalaphus was transformed by Ceres into an owl, and condemned to predict evil, because he had accused her to Jove of having eaten a young pomegranate in secret, against the prohibition: Ill-omened in his form, the unlucky fowl. Abhorred by man, and called a screeching Owl.

In Africa, the owl is associated with black magic, witchcraft and sorcery. To the Bantu, the owl is the “familiar of wizards.” The Swahili “believe that the owl brings illness to children.” Zulus say the owl is a bird of sorcerers, and messenger of wizards and witches. in Madagascar the owl gathers with witches to dance on the graves of the dead.

In Hinduism, an owl is the vahana, mount, of the Goddess of materialism and wealth, Lakshmi. In Arab mythology, owls are seen as bad omens. In English folk-lore the barn, or screech owl is specially invested with supernatural power. In Sicily, the Owl that cries by night near the house of a sick man announces his approaching death. In Hungary, the Owl is called the “bird of death.”

The owl was regarded by the Indians of Central America such as the Aztecs, Hopi, Mayans, and Peruvians as a symbol of death and destruction, and sacred to the lord of the dead. The owl, under the name of the Moan bird, is always associated with death among the Mayans. The Hopi had associated owls with sorcery and other evils. Mictlantecuhtli, was the Aztec god of death who was often accompanied with owls.

To the Native American cultures such as the Cherokee, owls were the sign of a very bad omen; that if an owl flies over your head in the broad daylight, a family member or loved one would die within a week. There is an old saying in Mexico that is still in use: Cuando el tecolote canta, el indio muere (“When the owl cries/sings, the Indian dies”).

The only cultures who did not depict the owl as a sign of evil were the Athenians, Normans (Vikings/Swedes) and Mongol Tartars. The Athenians considered the owl’s appearance as a sign of victory which gave rise to the proverb — “When the owl flies, the enemy fleeth.” The owl later became sacred to the Goddess Minerva who was the goddess of wisdom, war, art, schools and commerce.

The Mongol and Calmuc Tartars who are the Turkish descendants of the Hittites have held the White Owl sacred since the days of Genghis Khan. They say when a bird of this species having settled on a bush in which that prince had hidden himself from his enemies, those who pursued him past it, not believing that a bird would perch on a bush wherein a man was concealed.

Minerva is the Goddess of the Freemasons who portray her as a young female in Grecian costume with an owl or cock by her side.

These ancient descriptions leave us with the immortal clues of the true identity of the secret symbolism of the owl that later turns into the goddess figures such as Athi, Ishtar, Isis, Athena and Minerva.

“There the owl nests and lays and hatches and gathers her young in her shadow; indeed, there the hawks are gathered, each one with her mate.” Isaiah 34:15

I’ll leave you with a quote of wisdom from Charles Knight, “Some writers say, beautifully if not truly, that the owl became the symbol of wisdom from its property of seeing in the dark.”