The Devil’s Tritone: How it induces hypnosis in listeners to control their minds

The Devil’s Chord, the devil’s interval, the tritone, the triad, and the diminished or flatted fifth are a combination of musical notes that are designed to create a chilling or discordant sound that makes for a foreboding atmosphere.

After all, music is hypnotic and activates specific neuro cortical structures in the brain inducing whatever emotion the musician desires in their listeners. 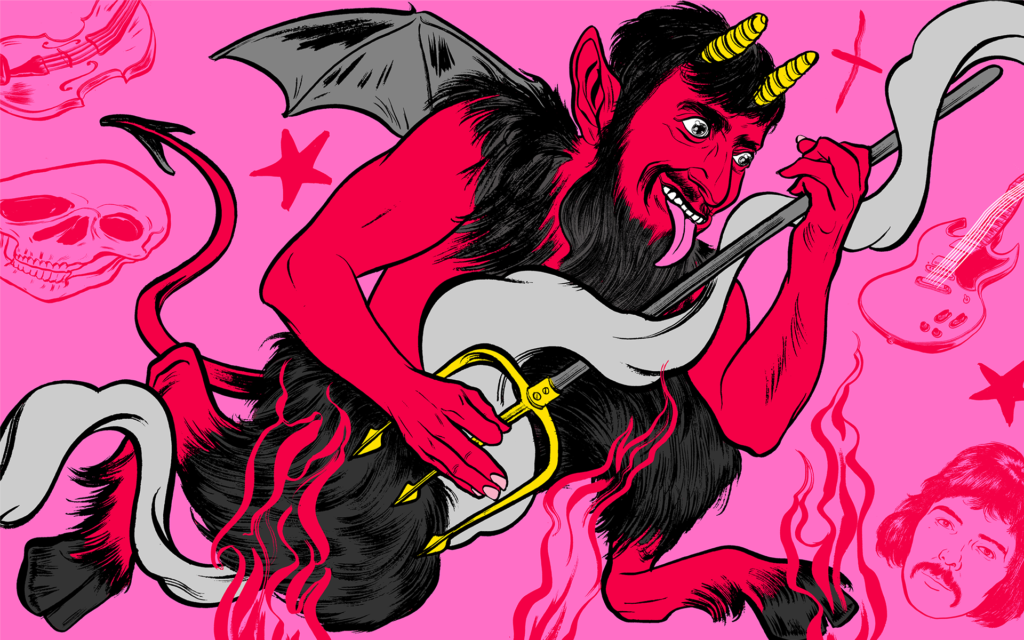 This is why the interval has been used for centuries as a way to scare people or subvert religious music. In medieval times, it was associated with the Devil and referred to as Diabolus in musica (the Devil in music) – so much so that some composers have tried to banish it entirely from their compositions.

It has been said that in the Middle Ages people were forbidden from using flattened fifths because of the evil tone it creates and brings demonic forces.

The devil’s tunes were the antithesis of godliness. It has been called the Devil’s Interval since at least the 16th century.

Over time, the sound has wound up in classical music, jazz, rock, heavy metal, rap, and even Broadway musicals in some of the most popular songs of the 20th and 21st centuries.

THE SCIENCE OF THE DEVIL’S TRITONE

It is used to create tension, discord, or suspense in music and more importantly, it has also been connected with inducing a ‘hypnotic state’ in the listener.

The use of music and sound for inducing ‘hypnotic’ and ‘subconscious’ states and capacities etc. is used to artificially produce a build up of emotions, energy and tension within the listener. Meaning, it is the musician controlling the energies and we can say the minds of their listeners with hypnosis via certain musical tones rather than the listener themselves.

Musicians can be compared to the flute playing snake charmers of people.

They are magicians who through their music control their “raving mind controlled fans.”

The Devi’s tri-tone invokes an automatic and mostly un-noticed tension and energy in a being who in turn may themselves invoke this same kind of tension in themselves through various means. If the listener is unaware or unconscious of what is happening, they may misdirect and misuse this energy towards their own self destruction and that of their family or the community and nation to which they belong.

You can clearly see this in the punk rock and rap music scenes whose adherents regularly destroy themselves through their destructive and violent lifestyles.

The lyrics and music have now been programed into their minds to the point that their thoughts, words and actions play like a schizophrenic tape recorder of their favorite playlist. In a sense, their minds and spirits have been purposely inverted by music which is manipulating their unconscious thus increasing ‘egoism and selfishness’.

Musical tones that have the potential to be used for both suggestions for inducing a sleep like trance state to mind control people as well as for awakening conscious development.

The Devil’s Tritone is meant to do the former by inducing an artificial tension and friction that builds up of negative emotions in the listener that can lead to destructive behaviors if not able to be expressed in a positive way.

Scientists have found that emotions induced by music activate similar frontal brain regions compared to emotions elicited by other stimuli. Fearful and sad music is associated with increases in right frontal EEG activity and joyful and happy musical segments were associated with increases in left frontal EEG activity and the more intense the music, the more frontal brain activity.

It is interesting to note that when unpleasant music is played, the posterior cingulate cortex activates, which indicates a sense of conflict or emotional pain in the listener which is associated with the right hemisphere of the brain. Anyone who has listened to heavy metal, punk rock and even gangster rap understands that it invokes certain emotions and energies.

This is why since the days of Anceint Greece, emotion has been linked with tonality. For thousands of years music has been viewed as being both potentially creative and destructive to the listener.

A powerful creative force that can implant thoughts and ideas into people’s minds unbeknownst to the ignorant listener who is unaware of this knowledge and science.

HOW IS THE DEVIL’S TRITONE PLAYED?

The tritone is made up of two tones that are six half-steps apart. It consists of two notes that are three whole steps apart, such as “C” to “F#.”

For example, if you take any note on a piano or guitar and play it along with its fifth (a half-step above) or seventh (a half-step below), you’ll hear a tritone.

In classical music theory, it’s called an augmented fourth (two whole steps plus a half step), a diminished or flattened fifth (a half step more than a whole step).

In music theory, consonance refers to sounds that fit together well. A major third — the distance between two notes on a piano keyboard — feels pleasant because it’s in harmony with nature: The sounds we make when we hum or sing are based on harmonics that have a frequency ratio of 2-to-3 (for example, A to C).

Consonance also has to do with how stable or unstable a sound is — whether it feels permanent or fleeting. This is why minor keys often seem sadder than major ones; they’re less stable because there isn’t enough consonance to create a sense of resolution after each chord change.

WHAT MUSICIANS AND BANDS PLAYED THE DEVIL’S TRITONE?

The tritone is often heard in classical music when composers want to create tension or foreshadow danger — like in the Dies Irae section of Mozart’s Requiem Mass to symbolize the descent into hell or Wagner’s “Ride of the Valkyries” from Die Walküre.

In 1666, German composer Heinrich Schutz wrote Cantata No. 12 “O süßes Jesulein” (O Sweet Little Jesus), which includes a passage using a tritone called “the Devil’s interval.” The piece caused such a stir that the Catholic Church banned it from being played during mass services.

Beethoven’s 1805 opera Fidelio is flush with triads, as is Richard Wagner’s 1848 composition “Gotterdammerung.” French composer Claude Debussy loved using tritones in his music and used them heavily in his opera Pelléas et Mélisande (1902).

In jazz terminology, it’s often called an “outside” chord. That’s because it tends to sound dissonant against other chords in a tune — especially when played by a saxophone player who has been improvising too long without knowing where he is going to end up .

It was used often — especially Miles Davis and John Coltrane who used it frequently in their recordings together.

For example, Miles Davis’ use of the tritone in “So What” from Kind of Blue is considered one of his most important contributions to modern music.

The blues were regarded as the Devil’s music. Talented people like guitarist Robert Johnson were considered to be influenced by dark forces like the faustian myth that the musician disappeared to Highways 49 and 61 in Mississippi, where he met the Devil and exchanged his guitar for the bluesman’s soul.

The godfathers of metal, Black Sabbath built their music careers using the Devil’s chord. The primary riff used in “Black Sabbath” from the band’s 1970 self-titled first album, which is based on (and begins with) the tritone interval, can be credited to guitarist Tony Iommi.

“He came to rehearsal one day,” Ozzy Osbourne remembered of Iommi’s innovation in 2001, “and said, ‘Isn’t it funny how people pay money to watch horror films; why don’t we start playing scary music?’ And then he came up with that ‘Black Sabbath’ riff, which was the scariest riff I’ve ever heard in my life.”

Iomni developed Sabbath’s sound after listening to a piece of classical music he and bassist Geezer Butler enjoyed by Gustav Holst called “Mars, The Bringer of War” from the suite The Planets (written in 1914).

Iommi began experimenting with the sound on guitar by slowing it down to a crawl, and he liked the unsettling feeling it created. Then he added a trill to the flatted fifth, repeatedly wavering from Db to D and added vibrato to the other notes playing at different speeds and with varying chord combinations to emphasize the tension of the music.

“I was particularly interested in The Planets and ‘Mars’ by Gustav Holst. There’s a sort of tritone in that and I was always playing that on bass funnily enough before we even started writing songs and I think subconsciously it may have influenced Tony,” Butler recalled.

Iommi recalled, “Just one day we were in the rehearsal room and I started playing, as I did, ideas and this riff came out and I thought, ‘God!’ I really liked it and the other guys said, ‘Ah, that’s really good. We really like that.”‘So, I put more to it and that was it, it became ‘Black Sabbath.'”

“We built it up, but that was immediate — once we’d done that song, that was the direction and we knew where we were going then from that first riff. It just gave us a certain feeling,” the guitarist continued.

Iommi used the Devil’s tritone in many Sabbath songs, and when the band became successful, the tritone became a staple of the heavy metal genre.

Countless bands such as Judas Priest, Metallica, Slayer, Marilyn Manson, and Slipknot have all used this technique to their music.

Slayer even named their 1998 album Diabolus in Musica in homage to the technique.

Dave Mustaine, founder and frontman for the metal band, Megadeth, was featured on ABC News’ Nightline for an episode called “Battle With The Devil,” which detailed the occult, and belief in the devil.

Mustaine, who is a Christian, now, shows the ABC host the chord progression of the Devil’s Tritone and says; “The devil’s tritone is made up of these three notes, and this note right here drops down one, so it goes…

So listen to the difference. It just sounds evil, doesn’t it.’

Which is why the progression is used so frequently in death metal.”

Mustaine says he is a Christian now, but wasn’t always.

Today, we have examples like Radiohead’s “Paranoid Android” and Trent Reznor’s “Something I Can Never Have.”

This sequence is basically a dissonance, that is, an apparently “unstable” sound that needs to be resolved into a more “stable” consonance.

What songs use the devil’s interval?

Danny Elfman — “Theme from The Simpsons“

Nick Cave and the Bad Seeds — “The Carny”